What is a Reversal?

A Reversal is a change in the direction of the price of a security or asset. It can be either an upward or a downward shift in the price. This change usually happens after the price has been in a sustained trend for a period of time.

Reversals are common in the financial markets and are considered very insightful for Traders and Investors.

What Does a Reversal Tell You?

A reversal can provide insight into how the market will likely move in the future. This can be used as a signal for investors to enter or exit a position in the market. Reversals occur in every timeframe and are relevant for every kind of trader and investor. 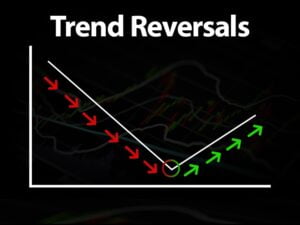 How to identify a Reversal?

Trend Reversals can be identified by looking at price action. As described above, Which is relatively simple. However, Some traders and investors believe in using indicators. The Moving Average is one useful indicator that can help you identify a trend reversal.

Another Tool that can Help you Identify Trends and trend Reversals is Trendline. Trendlines are a reliable way of identifying and trading a particular trend or trend reversal.

How to Trade a Trend Reversal

Lets us Understand How a trader can Trade using an example of a trend reversal.

As We can see in the picture above, The price of the asset was in a strong uptrend making higher highs and higher lows. We can see a trendline marking the uptrend. Traders who want to take aggressive positions can Consider going Short at the breakout by setting the Previous low as the target while keeping the stop loss at the previous high. At the same time, Safe traders can enter a short position after a retest.

Difference Between a Reversal and a Pullback

A pullback is a short-term correction in the market. This correction occurs after the price has been in a sustained trend for some time. Pullbacks can be either an upward or a downward movement in the price.