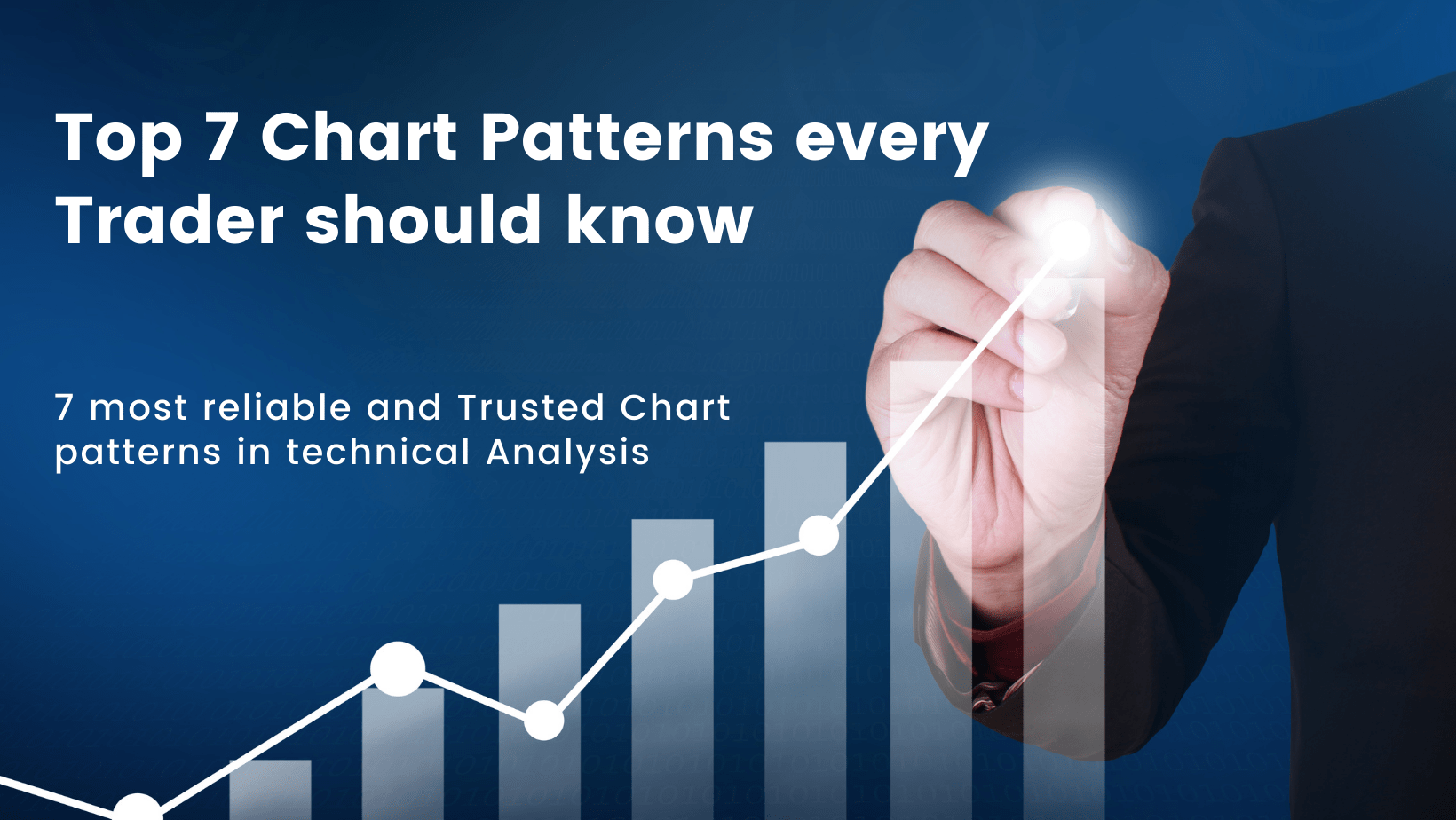 What are Chart Patterns?

In the most simple words, Chart patterns or Price Patterns are a way of viewing a series of price data that forms during a stock/commodity’s trading period. A chart pattern can be on any time frame, monthly, weekly, daily etc. Chart patterns play an important role in technical analysis and having knowledge of chart patterns is very important for traders.

It is in human nature to look for patterns in everything we do. they appeal to us naturally. Having the ability to recognize Chart patterns early gives a trader an extra edge in the market.

Here are 7 of the most popular and Trusted Chart patterns :

A double bottom pattern is a type of trend reversal pattern. in other words, this chart pattern marks an end of a downtrend. A double bottom chart pattern describes a fall, followed by a rebound, then a fall and then a second rebound from the same or similar level as the first fall. This pattern when successful looks like a W.

The head and shoulders pattern is a bullish to bearish trend reversal pattern. which means this Chart pattern marks an end of an uptrend and the start of a downtrend. A successful head and shoulder pattern is formed with a baseline generally known as the neckline, and 3 peaks. The 2 outside peaks are close in height and the middle peak is the highest. As the name of the chart pattern suggests, the highest peak is called the Head, the other 2 peaks are called the shoulders.

Here is an example of a Head and Shoulders pattern

The Cup and Handle pattern is one of the most important Chart patterns. This pattern is considered a bullish continuation and a bearish reversal pattern. Just like the name suggests. this chart pattern consists of a Cup which is usually U-shaped. and a handle which is usually the retracement from the prior top to about 1/3rd of the vertical height of the cup.

A flag pattern is a type of trend continuation chart pattern. which means it indicates that the price of a security will move in the direction of an existing trend. However, sometimes the flag pattern can be both a bullish or bearish pattern. These Chart patterns are formed in the areas where price action is consolidated within a small range. These ranges are small rectangles or channels. A breakout from these ranges is usually in the direction of the existing trend of the market.

there are 3 types of triangle patterns

Pennant patterns are very similar to Triangle chart patterns. just like the triangle patterns, 2 trendlines that meet at a set point form a successful pennant pattern. Traders observe these patterns after a sharp upward or downward move.

similar to a triangle pattern these patterns mark a pause in the current trend. before the trend continues in the same direction.

A wedge pattern represents consolidating price action between 2 trendlines. Unlike the triangle and flag, the wedge doesn’t have a horizontal trend line. The wedge pattern is characterised by either 2 downward trend lines or 2 upward trendlines. And just like in the case of any other chart pattern traders wait for a breakout in a particular direction In order to take up a position.

Chart patterns play a key role in technical analysis. if a trader learns and understands how to use them. they can provide great insights regarding the reversal and continuation points of the market. Analyzing a chart pattern is essentially a part of a trader’s trading psychology. These patterns are fairly accurate when used wisely. But even after that, in my opinion, they work best within a larger trading system. In conclusion, Other technical indicators like MACD, Moving averages and Fibonacci retracement etc. can provide trustable confirming signals for Chart patterns.